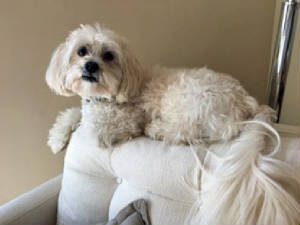 Hello,
Here is my pal, Jake, who just turned 11.
Talk about a cool dog!
Happy to report that he is as healthy and as playful as ever.
He amazes me with how much fun he has playing with a toy – he randomly just goes to town tossing the thing in the air and chasing it around the house, it is hilarious.
The sound effects from him are something else, he reciprocates sounds like he’s having a conversation with you.
He can be as active or as lazy as you need – totally flexible.
In fact, we’ve had to move around the country and he tolerates steaming Houston heat, muggy Memphis and cold New England snowy winters.
He doesn’t like to go out in the rain though, but anything else is cool.
I call him a lot of things, but one is that he is a dog for people who hate dogs.
He charms even them.
In fact, people have “borrowed” him to con their dog-disliking family members into getting a dog, successfully.
His native American name is “son of most gifted”, since that was his Sire’s name. It suits and everyone gets a kick out of that name.
Anyway, just sending my deep thanks for bringing him into our lives.
Fondly,
Eileen Hansbury
Providence, RI

The beautiful gardens, rolling hills and miles of board fence of Gleneden are located in Berryville, Clarke County, Virginia.
Visitors are welcome by appointment.

WE LOOK FORWARD TO WORKING WITH YOU